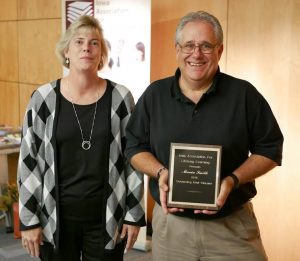 A heartfelt congratulations goes out to one of our own, Marv Smith, who was recently named the Iowa Association for Lifelong Learning (IALL) Outstanding Adult Educator for 2018.

Smith, now retired, has a long association with Eastern Iowa Community Colleges (EICC) dating back to 1988 when he was an older adult student himself at EICC’s Muscatine Community College (MCC). Earning his Associates in Arts Degree from the college set in motion his commitment to others in their own personal efforts toward continuing their education.

That commitment took the form of serving as an EICC Admissions Officer, working at the college’s Blong Technology Center beginning in 2006. In that role he worked with countless adults seeking to begin new careers by returning to college to earn degrees in the various manufacturing programs offered at the center.

In 2009 he returned to the MCC campus to become Director for Business and Industry Training where he worked with local businesses to train and retrain their workforce. He also continued to assist the college in recruiting students and spreading the word about the importance of lifelong learning.

“If it hadn’t been for MCC, I can tell you very honestly that I never would have gone to college,” Smith said. “MCC has made a huge difference in our lives. The college is a vital link to our community’s future.”

Not one to settle on that, Smith continued his work even after retirement as a volunteer lab assistant for the college’s Tyson 1+2 Industrial Training program in Columbus Junction. He completed the eight-month training program himself so that he can serve as a substitute teacher upon request. He is now in his third year in the program.

“When someone reaches out in need of education, I want the hand of Eastern Iowa Community Colleges to be there,” Smith said.

In addition to classroom education, he also lives the philosophy of lifelong learning via community involvement. He has continued to serve on the steering committee for Leadership Muscatine; a yearly program that introduces new community members to the city and encourages service leadership. He also serves on the MCC Alumni Association, mentors students in the college’s HiSET and English Language Learner and donates time, money and energy to many committees in the community.

IALL encourages the growth and development of continuing education in the state of Iowa. Its membership is primarily comprised of the state’s community colleges and those involved in providing lifelong learning to Iowa’s citizens.