Life gives us limitations, whether they are physical or situational.

Then, there are limitations we put upon ourselves, you know the ones…our own feelings of self-doubt or insecurity. In those instances, changing your mindset from self-doubt to self-belief can be a long, hard road. As recent Muscatine Community College (MCC) graduate Deana Dawson can attest, it’s a journey well worth the effort.

This spring, Dawson overcame one obstacle after another – all using the power of her own mind combined with support from the MCC campus community, her church family, and friends. She said the start of her personal transformation began with one simple question:

Why not? That’s the question Dawson had begun to ask herself. For the woman whose cerebral palsy had perhaps held her back in the past, a new mindset was beginning to take shape. Dawson was born in the early 60’s, before the therapies and medical advances available to cerebral palsy patients today. By the time of her divorce more than six years ago, she was unable to care for herself. Lacking strength, she could not transfer herself in and out of her wheelchair, let alone stand up or walk short distances. As a result she went to live in a nursing home, first in Illinois and eventually in Muscatine.

“I was told I’d never get out, I’d never succeed,” she said.

So, when a friend at the nursing home suggested she enroll in classes at Muscatine Community College, she was more than skeptical.

“The first class I took I thought, ‘I can never do this, I’m crazy.’ I wanted to drop, but everyone on campus and my advisors told me not to.”

One class turned into two, two classes turned into three, and before she knew it she was well on her way to earning an Associate’s Degree. Little did she know at the time, this would be the first of many accomplishments.

“I got into Phi Theta Kappa (the college honor society) and began to understand there was more to life than what I realized if I just looked outside of the nursing home walls,” Dawson said.

It was a snowball effect. If she could take classes and do well, maybe she could get stronger too. With a new found determination, she started physical therapy and was even able to get a motorized wheelchair that allows her to stand. The increased mobility not only strengthened her legs, but it also made it easier to navigate campus and participate in activities. By the time graduation rolled around it was no surprise Dawson was selected to give the student address.

“My limitations or perceived limitations are different than yours, but each of us have challenges,” she said to the crowd. “You can choose to look through the lens of possibility and what can be, and strive for what could be instead of what is.” 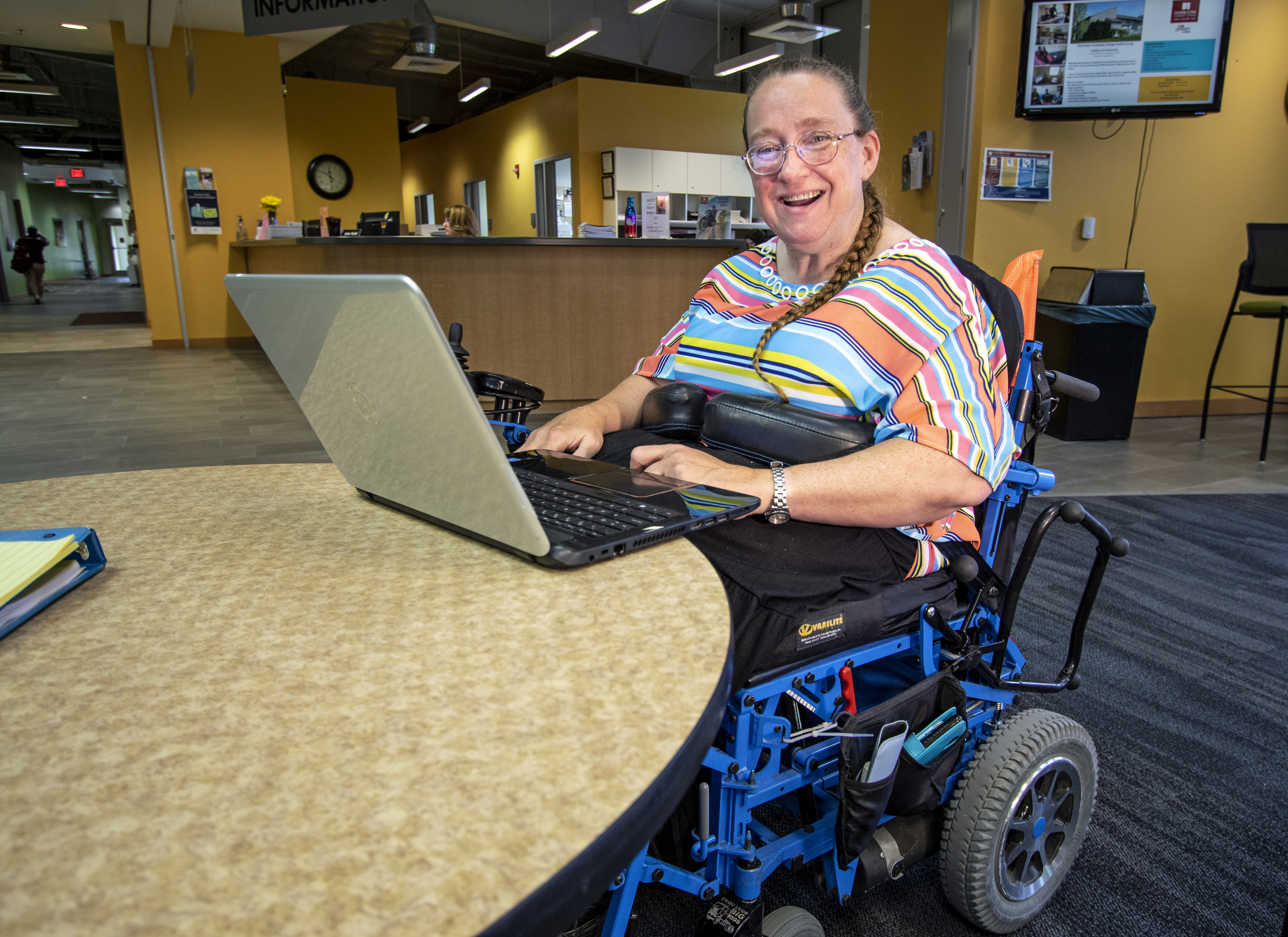 She got a standing ovation. Her inspiring speech had the whole room on their feet. But it was only the beginning. Dawson said she didn’t want to just give the speech, she wanted to live it. What happened shortly after her address is a moment no one was prepared for and one Dawson will cherish forever. As her name was called, she proudly stood up and put one foot in front of the other, walking to receive her diploma.

“Walking to get my diploma had been a goal of mine since high school in 90. I didn’t make it then, I wasn’t strong enough,” she said. “The entire experience was awesome. It took me about a day and half to two days to fully process the enormity of the night of graduation and I wouldn’t trade it for the world.”

Since graduation, Dawson has continued to exceed her own expectations. With her new found strength, she was able to move out of the nursing home into her own apartment and recently walked more than 200 feet with a new set of braces – the furthest she’s ever walked. This summer, she enjoyed the thrill of adaptive water skiing and will be hitting the trails on horseback in the near future. Life is full of color.

It’s a lesson she hopes to pass along. In addition to all of her other activities, she’s started a second degree program at MCC with the end goal to get a job in social work helping others realize their own potential.

“The thing is, I’ve been through so much…I was in a nursing home for six years. Now I’m on my own in my own apartment. If I can do it, then why can’t everybody else? Everyone has a potential they can reach and I just want to be an example that it can be done.”

Dawson attributes much of her recent success to the community and encouragement she found at MCC.

“It’s more than just a college it’s a success nebula” she said.