You can’t blame students from Clinton Community College’s (CCC) Graphic Arts Technology program for feeling as if they were on the red carpets of Hollywood as they attended the annual American Advertising Awards gala in Cedar Rapids this spring.

Just as actors, actresses and musicians gather around banquet tables, anxiously waiting to hear if their names will be called for an Oscar, Emmy or Grammy, so too did the CCC students. They didn’t go away disappointed as three students heard their names announced for top honors, including Best of Show.

The American Advertising Federation’s annual Addy Awards are one of the industry’s largest creative competitions, attracting nearly 35,000 professional and student entries each year through local competitions.

The Cedar Rapids/Iowa City Chapter recognized both students and professionals for their work in numerous categories, including website design, magazine advertising and more.

Ashley Serra, a second-year student at CCC was the big winner of the night – taking home a total of three awards, including the coveted Best of Show medal and a Gold Addy.

“My Best of Show and Gold piece was my favorite artwork I’ve created at CCC so far, so knowing the judges agreed was satisfying,” Serra said.

“Art and design are so subjective that you never really know how you’ll do in a competition. So when I heard my name called in the middle of the presentation, it felt a little surreal.” 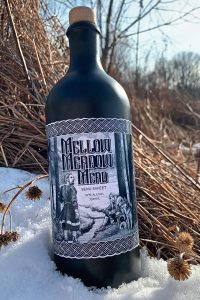 Serra used a unique approach to create the winning look, which was a bottle label for her fictional brand of Mellow Meadow Mead, a name born from her love of alliteration.

“My design process for this project was centered around illustration. For reference, I made a photo composite of various Scandinavian landscapes and costumed figures. I freehanded the final drawing with graphite pencils, scanned it into the computer, and then overlaid specially selected fonts for the product information.”

She also took home a Silver award for her work with the River Music Experience in Davenport, designing posters for their upcoming musical acts. She thinks this type of hands-on experience emphasized at CCC made a difference on awards night.

“As for winning, I haven’t had my work recognized by a professional organization before, so by the last award my eyes were tearing up a bit with joy.”

The student designers competed against students from other colleges including the University of Iowa and Kirkwood Community College, bringing home these five awards:

In addition to taking part in the awards ceremony, students were able to meet and network with professionals in the advertising industry. A group of 20 students attended the gala.

“This event provides a great learning opportunity for our students,” Program Director Christopher Legal said. “I’m very proud of them and the quality work they are doing.”

Click here to learn more about our Graphic Arts program!