Alumnus, veteran and “stylist to the stars” to share inspiring story with students and community 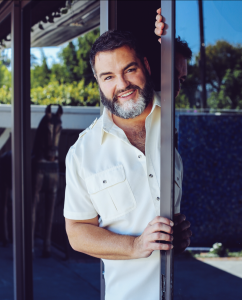 Scott Community College (SCC) Alumnus Dean Banowetz is a man of many talents. His career has taken him from serving as a soldier in the U.S. Army to styling the infamous locks of American Idol’s Ryan Seacrest.

Banowetz will be sharing his unique career journey and personal story of perseverance, grit, and success with honors students at SCC’s annual Student Showcase, as well as at a public presentation Friday, May 3 from 1 – 1:30 p.m. in room 1501 at Scott Community College, 500 Belmont Rd., Bettendorf.  Everyone is invited to attend.

Before the Dewitt, Iowa native went on to became the “Hollywood Hair Guy,” Banowetz completed his Associate’s Degree at Scott Community College where classes like art history helped him on his pathway to becoming a sought-after celebrity hairstylist.

After attending SCC, he continued his cosmetology education, then went on to own three prominent salons in the Quad Cities area.  In 2000, Banowetz moved to Los Angeles, where he landed a gig on the series Extra and attended On Set Motion Picture Hair Academy to refine his practice. In 2002, he took a job on American Idol, where he was responsible for styling the hair of Ryan Seacrest, as well as all of the contestants.

Banowetz now spends his time doing hair for celebrities and prime time TV shows and specials, including Shark Tank (ABC), So You Think You Can Dance (FOX), America’s Got Talent (NBC), Katy Perry’s AMA performance and Taylor Swift’s performance at the 56th Annual Grammy Awards, just to name a few.  He also recently wrote and self-published his first book The Dean’s List of Daddy Dos, a book written to help create basic dos for your daughter’s school photos, dances and family get-togethers.

Following Banowetz’s presentation, the public is also invited to attend a free showing of Suicide the Ripple Effect from 1:30 – 3 p.m. in Room 1501 at SCC.

This powerful and impactful video documentary tells the story of Kevin Hines, who at 19-years-old attempted to take his own life by jumping off the Golden Gate Bridge. Seventeen years later, he still struggles with many of the same symptoms that led him to attempt to take his life, but he is on a mission to use his story to help others stay alive.

Across the globe, nearly 1 million people die annually by suicide. In the United States alone there are one million suicide attempts in a given year and more than 40,000 deaths by suicide, with our military being hit particularly hard. Research has shown that for every one death by suicide, more than 115 people are directly affected and impacted. The estimated financial cost of suicide is over 40 billion dollars annually.

Hines takes a journey to better understand the ripple effects his suicide attempt had on his family, friends, and the first responders who helped save him. He’s also working to shine light on inspirational individuals, families and organizations who are using personal pain to help others find the hope they need to heal.

This video addresses the statistics, stigmas, the culture, available resources and the real impacts of suicide on others.