Sometimes a chance meeting is all someone needs to change their life. For Claudy Pierre-Charles, that moment came during a shared coke on a Haitian beach. From that single conversation blossomed an opportunity the second-year Scott Community College Auto Tech student never could have imagined.

“It sounds a little crazy, even watching movies or TV, I never thought I would come to the United States,” Pierre-Charles said.

A native of Haiti, Pierre-Charles was working as both the transportation head and a translator for Youth with a Mission (YWAM), a Christian missionary organization, when he met Kevin and Diane Cassatt. The couple was on a medical mission in St. Marc and on the final day of their trip Pierre-Charles drove them to a beach.

“I was just sitting by myself and Kevin said ‘why are you sitting by yourself? You can come and sit with us.’ So, I went to sit with them and they offered me something to drink and bought me a coke. And we were just talking and he asked me what I wanted to do, and I told him I really want to learn about cars.” 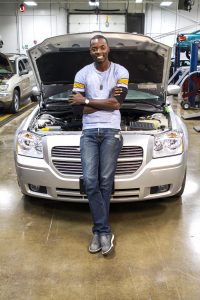 Pierre-Charles said working as the transportation head for YYAM had inspired him. Up to that point he had been doing some maintenance checks on vehicles, but he was mostly tasked with driving and didn’t know much beyond the basics. When he mentioned his desire to learn how to fix cars, Kevin offered to connect him with Scott Community College (SCC).

“He said ‘remember to give me your email before I leave and we can stay in touch.’”

The couple kept their word, staying in touch with Pierre- Charles for two years while he completed the appropriate paperwork to travel to the United States.

“It happened very quickly and it just makes me really, really grateful. They opened their home to let me stay with them, and it’s just really overwhelming. I don’t have the words to tell them how grateful I am.”

Moving to the Quad Cities and living with the Cassatt family has been an exciting adventure. Experiencing so many “firsts” has been particularly memorable.

“One of the things that really surprised me is that I had never seen snow before,” he said.

So waking up on his birthday to a winter wonderland is something he’ll never forget.

“I looked and all around me everything was white and I said ‘oh my goodness’ and I felt so cold. That made me so happy, I used to see snow on TV and now I’m living it.”

He’s also living his dream of becoming an auto mechanic and acquiring a skill set he can use to make a difference.

He said being able to take something that is broken and fix it is extremely rewarding. 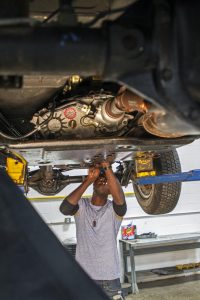 “It’s been really great. I’ve learned a lot about stuff I didn’t know before, especially about safety. Back home we don’t pay attention to safety as much and now it’s a big thing, safety is first. It just makes me so happy because not too many people know how to fix their car or even change the oil. They have no idea what’s wrong and as soon as I take it for a test drive I can just notice it and go specifically to where it needs fixed.”

Pierre-Charles said there aren’t really any auto body shops in Haiti with the appropriate tools and equipment, so learning in SCC’s state-of-the-art auto tech lab has been an eye-opening experience. Most people just fix their cars on the street, sometimes in rain or mud.

“It’s a big need. There are a lot of cars, but people don’t really do maintenance, so they are just driving unless it’s broken down.”

Pierre-Charles will graduate in May and plans to gain more experience before moving back to Haiti. He said he hopes to raise enough money from investors to open a full service auto body shop near his hometown of St. Marc.

He plans to not only provide a facility for people to go to work on their cars, but also training and jobs for local youth.

“Just like someone choosing to help me get my education, by opening a shop I would be able to teach some of the young people to work on cars and give back by providing local jobs and educational opportunities.”

While there is quite a bit of work to do before that happens, Pierre-Charles said he hopes his story inspires others to pursue their passion.

After all, chance meetings may lead to great opportunities but it’s up to you to succeed.

And that’s just what Claudy Pierre-Charles is doing, with the drive to make a difference in the lives of others leading his way.