Some gold medalists run, jump or tumble their way to the podium, others take a different approach.

For SCC Heating and Ventilation student Brennan Kearney, his shining moment came after an intense eight-hour sheet metal competition, where he cut, welded and riveted his way to the top, beating out 27 other competitors from across the country.

“I was proud and I guess relieved,” Kearney said of the win. “It was fun. Putting the pieces together and trying to fit everything, trying to calculate it and trying to make it look good.”

Kearney was competing at the National Skills USA Competition, which took place this June in Louisville, Ky. More than 6,000 career and technical students competed in 100 different trade, technical and leadership fields during the event, which even included an appearance from television personality Mike Rowe, host of the Discovery Channel’s Dirty Jobs. 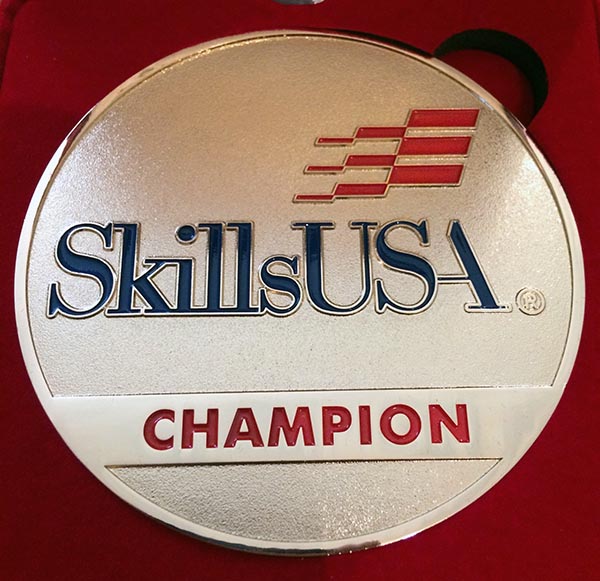 EICC students have been competing in the Skills USA Competitions for many years, but this the first year a student has received a gold medal at the national level.

Other winners from the district competition include:

For more information about our HVAC and other career and technical programs, visit eicc.edu/skills

Kearney qualified for the competition after placing first at the district competition earlier in the year. In the sheet metal category, contestants are tested on their ability to perform jobs such as connecting sheet metal pieces with drive cleats, spot welding and riveting. They are judged on the use of hand tools, correctness of layout, shop safety procedures, accuracy and craftsmanship.

His instructor Ezequiel Gonzalez said after spending about two months helping Kearney train for the event, he knew he could do it.

“Brennan is a good student. He would come in before class and after class in preparation for the competition and we would go out on the internet and find complex sheet metal patterns,” he said.

“I saw how nice the fitting was during the competition.”

Even so, nothing could prepare them both for the awards ceremony.

“There was an enormous amount of people, like a rock concert when they were calling all the winners. They called third, called second…and it just happened. We were both kind of speechless,” Gonzalez said.

“They called him and he came right up and we were both really excited. It was just an awesome moment,” he said.

And as much as it was a learning experience for Kearney, who graduated with his HVAC certificate this spring, Gonzalez said he took away a lot of valuable lessons too.

“When put in the position to train people to potentially change their lives and put them on a career path, you want to make sure you’re solid and feel good about your teaching. Obviously it takes student discipline, Brennan went above and beyond, but for me to have him do so well solidified that we are doing the right thing and teaching students the right thing.”