In between working 48 plus hours a week at Exelon and fulfilling his role as dad and husband to his wife and two daughters, Marvin Christiansen spends his free time at the Blong Technology Center working toward an Associate’s Degree in Engineering Technology.

While maintaining the grueling schedule isn’t easy, Christiansen is no stranger to hard work. 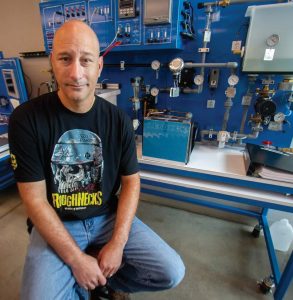 “I did just shy of 15 years in the Army, originally my goal was just to make Sergeant. I wasn’t planning to make it a career. I got injured a couple of times over in Iraq, so that put a kabash on that and I ended up getting out. When I was in I did armor and nuclear and biological chemical warfare,” Christiansen said.

After leaving the military, he put his experience to use working for Exelon’s security team. He said it’s a job he’s been grateful for because it helped ease the transition back to civilian life.

“It’s been 12 years and I still have issues with some stuff. After living a certain way for so many years it becomes normal, so when you try and change it you scratch your head. I have good friends and family around to help out,” he said.

And as he recently found out, he has Eastern Iowa Community Colleges too.

Christiansen said despite doing things like spending 30 days in Africa and jumping into action after the devastation of Hurricane Katrina, there is one thing he hadn’t done that has been nagging him for some time – finishing college.

“I did one year of college after graduating from high school and then went active duty for the Army. I would take classes here and there with them, but nothing really solid.  It’s always been kicking around in my head that I need to go back and finish this,” he said.

A fellow coworker told him about the assistance program from the VA and one of the colleges listed was Scott Community College. When Christiansen first started thinking about going back to college, he figured an online program would be the only way he could complete a degree with his work and family schedule.

However, after meeting with Eastern Iowa Community Colleges’ Veteran Student Affairs Facilitator, Rebecca Geiken, he was pleasantly surprised to find out there were other options. With his oldest daughter entering her senior year of high school and the youngest one turning five, he decided to go for it.

“It was a lot more possible than I thought and Rebecca kind of highlighted that. When I first looked online at SCC, I clicked on a Veteran’s link and it brought up Rebecca’s name. She was amazing,” he said.

Geiken serves more than 300 Veterans at all three campus locations and helps them with everything from enrollment paperwork to understanding their benefits to providing support.

“With her it keeps going even after you start, we all have her cell and personal email and she is always touching base.”

Christiansen said Geiken has even taken it a step further by organizing a Veterans group and offering a variety of programs, including a trip to Hot Glass, a local glass blowing company, where students created their own pumpkins. 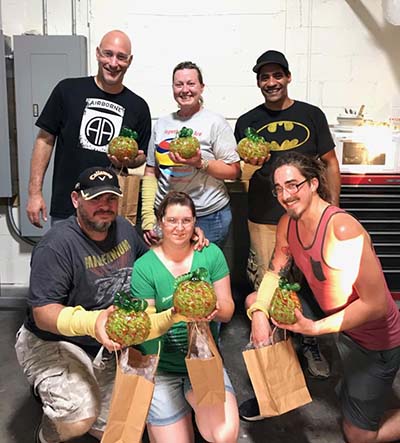 “I had no idea there was a glass blowing company in Davenport just a five-minute drive from my house. By getting to go there with Rebecca, I actually made friends with the owner and his son and on my days off I get to go there and work,” he said.

The pumpkins are part of a greater project called “Fragile,” which raises awareness for Veteran suicide and gives SCC Veterans an artistic outlet. The pumpkins were recently sold at SCC’s annual “SCC Bash” fundraiser and money raised will help provide continual funding to allow Veteran students the opportunity to work each year with Hot Glass as one step toward Veteran suicide prevention.

Pursuing something he really likes doing, whether it’s his new found hobby or Engineering Technology degree, has been a nice change of pace, especially since he can customize his studies to his goals and interests.

Students then apply what they have learned through hands-on work in the BTC’s state-of-the-art labs. The labs are open well into the evening, giving students the opportunity to work one-on-one with their instructors when it fits into their schedule.

“That type of flexibility is not something you might think of right away when you think about community college,” Christiansen said.

“The equipment they have there, they can kind of key it in for what it is you’re trying to learn, whether it’s just for that week or for your whole semester.”

He hopes to secure an electrician apprenticeship after graduation and has been able to focus on what he will need to know to successfully pass the apprenticeship test. Christiansen said “keying in” on a field that interests him has been one of the best parts of going back to college.

“For once I’ll go out and try something that I’m actually interested in. It makes a huge difference to do something you enjoy. This is definitely going to give me that.”

He said it will also give him the satisfaction of finishing what he started, allowing him to put that voice in the back of his head to rest, all while teaching his daughters a valuable lesson.

“Once you get older and actually see the difference in your life from having completed that education versus not completing it, you realize school is important, especially when you hit college. Like anything else in life you have to work hard for it, but the more you put in the better your odds are to get it all back.”