Awards were announced during the 2017 LERN Annual Conference in Portland, Oregon. EICC received the award for its partnership with Tyson Foods in Columbus Junction. 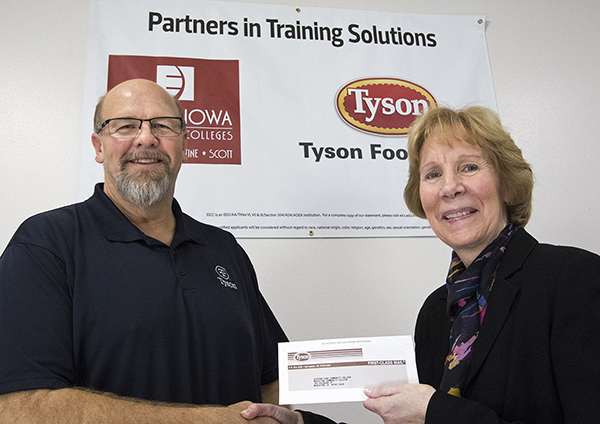 Tyson Foods Human Resources Director Dave Duncan presents Eastern Iowa Community Colleges (EICC) Dean of Continuing Education Deb Goodall with a check for $15,000. Tyson and EICC have teamed up on a unique partnership training Tyson employees in Industrial Maintenance Technology. The check was the second Tyson has presented to the college as part of its commitment to the ongoing program.

“Tyson was having a difficult time finding skilled Industrial Maintenance Technicians and in the spring of 2016 they reached out to Muscatine Community College (MCC), one of our three EICC colleges, to try and find a solution to the labor shortage issue,” said Deb Goodall, EICC Dean of Continuing Education. “We held several conversations with them about their need and decided the best solution was to grow their own employees.

“EICC put together a nine-month, 580 hour, hands-on training program, held at MCC’s Columbus Junction center,” she said. “The students in the program are untrained workers hired by Tyson.”

The program is a great “Earn While You Learn” opportunity for the students who are being paid as Tyson employees while they complete their training. They attend class in the morning and work at the plant during the afternoon.

“Our second class of trainees is nearing completion of the course,” Goodall said. “The first class was a huge success with a 92 percent graduation rate.”

The current class includes 12 employees, seven new and five incumbent workers. The program has become so successful that the class was filled entirely through word of mouth, no external advertising was needed.

Graduates earn wages that are more than double the average per capita income for the county and Tyson has begun building a new, skilled workforce from their current, local employees.

Tyson has also supported the program financially with donations to support the purchase of equipment in the program. Training simulators for the program can cost anywhere from $20,000 to $40,000 each. To help with that cost, Tyson has committed to donating $15,000 to the college each year the program is offered. The second of those two checks were presented to the college just last month.

“We are extremely proud of what we have accomplished with this program and believe it can be an example to other companies,” Goodall said. “We can’t thank Tyson enough for their trust in us and support of this program. It’s really been a win-win for both of us.”

The LERN award was presented at the association’s national conference attended by nearly 700 lifelong learning and continuing education professionals from across North America.